L’Aghulhas (or Cape L’Aghulhas as it is also known) is the southern – most town on the African continent and also the point where the cold Benguela current of the Atlantic Ocean and the strong Aghulhas current of the Indian Ocean meet.

Amongst the mysteries of this region, is the legendary ‘Cape of Storms’ which wrecked many ships en route to the east via Cape Aghulhas. Numerous shipwrecks of the early explorers attempting to conquer the wild seas off the southern tip of Africa, dot the coastline. How it came by its name (cape of storms) remains a mystery. One theory holds that the early Portuguese navigators gave it this name because at this point the needles in their compasses were unaffected by magnetic deviation and bore ‘directly upon the true poles of the earth. Another possibility is that it was named after the jagged and slanting rocks that project from the surf offshore, like a thousand needles waiting to pierce the hull of any stray ship.

The windswept, ruggedly beautiful coastal plain at the southern-most tip of Africa has recently been proclaimed as the Aghulhas National Park. The coastline supports a rich marine and intertidal life, with breeding sites of rare birds such as the African black oystercatcher. The nearby islands are home to a variety of seabirds and seals. In spring and early summer Southern Right whales frequent the waters of the Aghulhas coast.

Besides its ecological importance, the Aghulhas area has a rich cultural heritage. The discovery of stone hearths and pottery, together with shell middens, link the archaeological deposits with the era of Khoisan migration and settlements.

The famous Aghulhas lighthouse, dating back from 1848, is the second oldest working lighthouse in South Africa, sending its 11-million candlepower beam far over the dark sea. The koppie (hill) behind the lighthouse offers a panoramic view of the point where the Atlantic and Indian Oceans meet. In the shallow gullies near the Lighthouse, the remains of ancient fish traps – made by packing layers of rocks around the pools where the original Khoe Khoe inhabitants collected their fish – can still be seen.

L’Aghulhas has several attractions which draw tourists to its shores each year.

The lighthouse was built to aid the early explorers on their passage of the rough seas off Cape Aghulhas. Seventy-one steps lead up to the top of the second oldest working lighthouse in southern Africa. Stone mined from the adjacent limestone quarry provided the raw materials for its construction. The building also houses a unique lighthouse museum and restaurant. Remains of ancient stone fish traps used by the Khoe Khoe people can be seen to the east of the lighthouse. 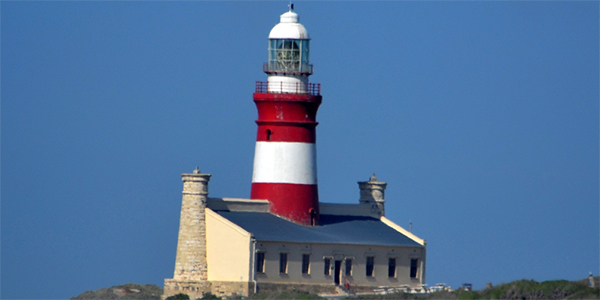 Graveyard of ships, the Zoetendal, Birkenhead and Arniston are some of the many shipwrecks found along the Aghulhas coastline. Showpieces from these shipwrecks are on display at the Bredasdorp Shipwreck Museum. Visitors to the area can still see the remains of the Meisho Maru, 4 km west of L’Aghulhas.

The southern-most tip of Africa, the official position of the tip is 34° 49′ 58″ south and 20° 00′ 12″ east. A cairn marks the tip’s exact position. It is at this longitudinal point that the Atlantic and Indian Oceans meet.

Hotagterklip Cottages is restored fishermen’s cottages at the entrance to Struisbaai, (8km) built by early fishermen. Some of the cottages are now used as holiday homes and have all been declared as national monuments.

Walk along the 14 km uninterrupted white beach at nearby Struisbaai (8km) and look for some unique shells along the shoreline of the bay.